Sushi Moto is quite a drive away for me from Richmond, but I was definitely more than satisfied with the food and would have no issue with driving that distance again for the amazing food that they serve. 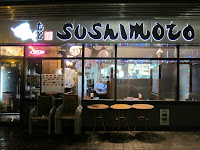 The friends I dined with tried a wide variety of dishes though we were a little bit disappointed because the restaurant had to turn down some of our orders as they were out of stock on oyster motoyaki, hamachi sashimi, and uni sashimi. :( 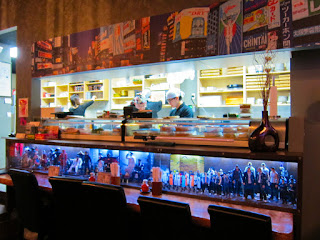 Verdict
Highly recommend
For anyone who loves to try unique Japanese flavors. It's not the cheapest place for sushi, but for the quality of the food, the price is more than worth it.

Although I think the owners of the place are Korean, the ambience definitely has a Japanese vibe with an interesting collection of action figures that populate the sushi bar as well as the vehicle models on the walls. The Hobby Japan magazines in the washroom is a nice touch. Staff was very friendly and were nice enough to give our party a few free dishes to try out.

Best dish: Aburi Ika
This was the most interesting flavour from the meal. I've never had Aburi sushi 炙り寿司, roasted sushi, before and I really loved this new take. The crispness of Ika with the roasted flavor and underneath that interesting texture is the minty after taste of shiso leaf.


Other highlights: All the sashimi dishes were super fresh and most of the other dishes were delicious in general and so here are a few of the ones I liked the most.
Failures
Avoid: This was the one dish that was totally unappetizing and tasted bland. The wasabi tobiko sushi needs to be taken off the menu.

Notes
When I go back to Sushimoto I already have a list of things I want to try that I wasn't able to hit on this trip. I'm definitely wanting to try more of the aburi sushi, fresh oysters and Oyster Motoyakis (hopefully they have oysters in stock next time), Moto Orange, and the Takowasabi.
Posted by Jeffrey Qua at 11:59 PM No comments:

Gmail UI Analysis
This is obviously a comparison on specifically the English UI. This analysis may not be relevant compared to other languages.

The switch to a dialog box is a good choice for an improved search interface by compacting the form and minimizing space usage. Modifying the form to a vertical form style follows a good practice (that I learned from Luke Wroblewski's book, Web Form Design) that leads to a more straightforward flow for the user to progress (from top to bottom) as opposed to the old design which had 2 vertical rows and lack of a clear path through the search form.

This button style correlates to similar changes of the "Create" button in Google Docs and Google Calendar. This is definitely a plus for consistency.

Dynamic Control Bar
-controls/actions are now more relevant to the user's accessible options
-Archive button is no longer as prominent (no bold, and reduced width)
-icons only with mouseover labels, may take getting used to
-icons aren't overtly obvious, but I guess learnable
-increased button height, easier to click
-consistent button sizes
Result:   +  Actions are now more relevant to state of the user view

There's still a few problems with the responsiveness of showing the right controls, but hopefully this gets fixed soon. I'd also prefer the archive button to be separate and a little more prominent. I'm also hesitant on the fully icon-based UI but I think it may be a better step to make it universal for all languages.


This new feature is definitely a welcome addition giving users some freedom to change the spacing on the screen. Definitely useful for certain users who may choose to view their e-mail window in a small screen, or for those who have different display sizes.

The subtle icon changes are complementary to the overall change towards the minimalist aesthetic. As a designer, the shift of the importance icon to the left and placed together with the checkbox and star features as a strong move to group related indicators and allows for easier understanding. This also creates a stronger line of readability with the tags/subject titles as they are now lined up (on an invisible left align) and much more visible against the whitespace of the sender names. (Although they were lined up before, the placement of the importance indicator beside them to the left in the old interface reduces a visual edge line of where the user should start reading.)

The shift towards icon-based buttons and the use of subtle placeholder text to remove action buttons reduces space usage. The addition of icons to identify the sender supports clarity of message ownership.


The separation of the advertisement from the interface creates a more relaxed visual style without having everything crammed together. The increased color contrast makes the ad more visible, that's great for advertisers and also makes it easier for the user's eyes. The removal of the ad surfing functionality makes sense for the most part - who scrolls through the ads for fun?


Other notes
-addition of a scroll bar for the message list is great for a more consistent interface (with the similar visual style, also preventing disappearing scroll bars) and also removing the reliance on the browser for the scroll bar style


Conclusion
I initially felt like I didn't like the new interface.
But after doing an analysis and comparison of the changes, the new UI is an improvement in almost every single way. I'm going to attribute the first impression of discomfort to the sudden change. My final evaluation leads me to conclude that the modifications vastly improve Gmail's UI with minimal drawbacks.

This was only a specific analysis of Gmail's new interface, but the changes to Google's other platforms such as Google Docs, Blogger, YouTube, and Google Calendar create a unified interface style to represent Google as a brand.
Posted by Jeffrey Qua at 11:00 PM 1 comment: