I broke my camera

*tear*
That's what I get for trying to clean the sensor. My poor Digital SLR. My poor Canon Digital 350D. It's actually not that bad. It's just a little pin I broke, but yet, it's still broken now even though it's such an insignificant piece of the camera. (I broke the 'Sub-mirror hinge'. It's a design flaw that Canon made it so prone to breaking, even if it is within the body of the camera. Repair is a...option. Not a financially reasonable option since it would cost about $200 just for labor, and the camera body is only worth around $500 now. So, I might as well get a new one.

Oddly, I would have thought I'd be much more upset. I think I would have flipped out about how I broke such an expensive piece of technology, but I'm just mellow right now. I'm more worried about not having a camera on hand rather than the fact that I just rendered a 1000$ camera useless. I'm totally Zen right now being immaterial, or I'm a complete idiot.
Posted by Jeffrey Qua at 7:58 AM No comments:

It's an interesting experiment which has the potential to change the world in limitless capacities...if it works.
If it doesn't, then well, maybe he's just found something that looks cool and help introduce more kids into science.
Posted by Jeffrey Qua at 10:14 AM No comments:

I'm ecstatic.
This was an awesome weekend.
I'm really lovin these new shoes my sis got for me at Aldo.

I'm havin a blast in general. I went for dinner with friends at Banana Leaf on Friday, dinner at Mad Greek with family on Saturday. Went sorta shopping with my sis this afternoon. Just chillaxin and relaxin for my b'day. I'd post some pics up of my shoes, but I can't find a pic of it online, and I don't have my camera on hand to take a shot of it. Urgh. I'll do it tomorrow! (if I remember to bring my camera home)
Posted by Jeffrey Qua at 10:33 PM No comments:

"Although being bound by constraints was tedious...
I couldn't bring myself to accept a life free of them.
In the end, it made no difference whatsoever."

A quote from Ghost In The Shell: Stand Alone Complex - Solid State Society

Ghost In The Shell always delves into interesting issues of politics and psychology. It's a little deep for the majority of people, but that's alright. It is like my own little private treat to be able to think at a much more intellectual level.

The above quote makes me think of people who are unsatisfied in their life. Stuck in a crummy job, having to go to school, bad financial situations, or anything where they feel like they would be better if X happened, or if Y didn't happen, or if they were Z. I believe the truth in the quote is that even if we change those factors, we would still be the same. You're more likely going to make the same good decisions, the same bad decisions, and be the same person even if your situation changed in that one aspect.

You can't play the blame game, because it's not going to move you anywhere. Believe in yourself. Mistakes aren't fatal if you use them as steps rather than poring over the fact that they occurred. A masterful painter does not stop each time he makes a mistake, he weaves it in to his masterpiece.

(I think I'm somewhat of a hypocrit. I don't completely believe in what I say here. But by saying it, I am making myself believe in it a little more every time)
Posted by Jeffrey Qua at 11:47 PM No comments:

I picked up some of those Anna's Ginger Snaps from Costco. Odd though, this is the first time I've seen it being sold elsewhere, i thought Ikea was the only place selling them.

Tonight's Simpsons was hilarious. The 400th ep spoof of 24 has been one of the best eps I've ever seen. Especially with the Jack Bauer lines, hahaha. The split screen zooms! Ah, I can't believe how masterful of editing techniques used in 24 were genius.
The Family Guy ep was pretty funny too. It was a spoof of Back to the Future. Agh.
HAHAHA. OH right, The random chicken fights! They finally introduced how it started. Hahaha.
Posted by Jeffrey Qua at 1:48 AM No comments:

Email ThisBlogThis!Share to TwitterShare to FacebookShare to Pinterest
Labels: television

The most exciting week on television!

This has got to be one of the best weeks of television I've seen because it's Season Finale week!!

CSI NY, Criminal Minds, CSI, House, and Numb3rs had some crazy episodes, some which aren't done but are leading up to the final ep for next week. Bombs, Drugs, Terrorists, Serial Killers, Jerks, Espionage, Codes and Ciphers. WOWWWWWWWW!

I can't wait for Monday's ep of Heroes. How are they going to stop Syler? Will they even be able to stop him? Zomgwtfbbq!
Posted by Jeffrey Qua at 2:05 AM No comments:

Email ThisBlogThis!Share to TwitterShare to FacebookShare to Pinterest
Labels: television

I've heard the name, but I'm not actually sure what Technorati does. I'm too lazy to wikipedia it right now. Haha.

Technorati Profile
Posted by Jeffrey Qua at 10:08 PM No comments:

Email ThisBlogThis!Share to TwitterShare to FacebookShare to Pinterest
Labels: technorati

Who says bosses are nice?

I do! From buying pastries to doughnuts on a semi-daily basis, the boss(es) at our office are always buying stuff for everyone to eat. Just today, our boss brought in Tim Horton's Iced Cappuccino's for everybody!

Haha, hooray for bosses who like to feed! Too bad my conscience isn't smiling, it's going "tsk tsk tsk. Calories". Oh, did I forget that I mentioned that out loud? I said "Thanks!" to my boss. I then began shaking my head and actually said "Calories!" and my boss had a good laugh. =D
Posted by Jeffrey Qua at 12:49 AM No comments:

My sister commented on how long my hair was, so I dared her to cut it. She did... Except she only cut it on the back. Because she didn't know how to cut the front or sides. I was looking pretty silly with long hair from the front but it was nice and short in the back. Haha. That was Sunday, and so I kept my hair like that for the past day and a half to make her feel guilty.

I finally went and got it cut today. I went to some barbershop/salon on Lonsdale Ave half a block from work. Now my hair is all nice and short. And I look like an Azn gangsta again!

Here's a random pic of me, my sis, and her daughter Elle: 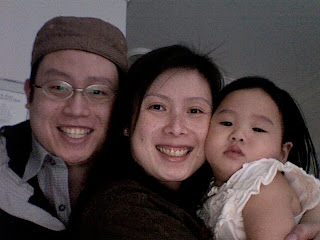 I really haven't paying attention to my portfolio site at all. I created it mostly just to display my work and maybe give my resume that needed web edge. A friend of mine just recently talked to me about site traffic and I strolled on over to see how much traffic I was getting.

I haven't done anything on the site in over 3 months. Yet, my traffic keeps increasing on a progressive weekly basis. I'm guessing all the buzz is based on Metronomic, my metronome Os X widget. I also checked my site referrals and I guess it didn't hurt that I got mentioned on a widget watch somewhere: http://www.applelinks.com/index.php/more/widget_watch_friday_february_23_2007/

I'm pretty sure that the majority of the users are still flooding in from the Mac OS X Widget site. But still, it's amazing, I'm getting an average of 1574 UNIQUE visitors each day. That number is accurate as of today. Some other useless statistics that seem pretty silly considering I haven't updated the site, so it's ALL about that widget.

Most of my deja vu's have been from dreams I've had anywhere between 3months before to a couple of years before. Today's was probably the most closest period of difference I have noticed. I experienced a deja vu walking towards the ice cream shop at Prospect Point in Stanley Park. The moment that struck me was when I was thinking of going down to the shops to buy some ice cream.
I think I had this dream/memory about 3-4 days ago. I'm still trying to determine if I'm crazy or not, and if I can really dream into my future. The concept sounds absurd, in a rational mind of though. But.... you never know, right?
Posted by Jeffrey Qua at 12:30 AM 1 comment:

HahahahA! That was one of Colbert's best throwdown videos ever. Subtitling "He's singin in Korean" when he was also saying that in English. Classic.
But! BEST OF ALL. His challenge "Rain, I'm gonna be all over you like egg on a bowl of bipembap!"

I'm a little knocked off balance right now. I went on a 1-night cruise last night from Vancouver to Seattle. Got back this morning. Basically we left around 6 yesterday, and then arrive in Seattle in the morning and take a bus back so we got back around 12. It's a really short trip, but it's something to do. Haha It's like a mini-vacation.
The fare was pretty cheap, it was only 120 CDN per person, including transfer and taxes. I'm not too happy with the cruise line though. The restaurants were closed pretty early. I usually expect some place to be open 24 hours since, well, that's what cruise lines are good for, food, food, and food, whenever you want. We rode NCL, or Norweigan Cruise Lines. The food is my only complaint since we didn't really get to try much of the other facilities. But as is, it's a cruise ship and if it fails on food, it fails in a very major way.

The cheap fare is good though, hopefully I can find some other ones like this but on other cruise lines, they're pretty fun as a weekend trip if you have nothing else to do. :D
Posted by Jeffrey Qua at 11:09 PM No comments: 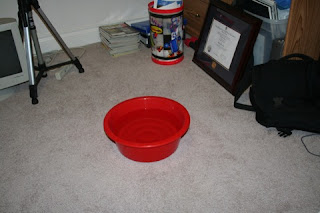 I can't believe Canucks lost tonight after starting with a 2-0 lead. Sigh, now they need to come back from a 3-1 deficit.
As you can see above, I'm trying to make a makeshift humidifier. For the past few weeks, I've been waking up sniffling and stuffed up. It's pretty much gone now after all the vacuuming and cleaning and almost dust-free in my room, but it's odd because I'm still waking up to nosebleeds. I'm guessing the dry factor now. I don't really have a humidifier, but apparently having water in the room works as well? Hopefully I'll wake up tomorrow not having to worry about my nose for once.
Posted by Jeffrey Qua at 11:27 PM 3 comments: