My new bookcase is up. This is the first time I've actually had a fully "functioning" bookcase. It looks very sleek and sexy too.
Hmm... I'm very behind now in my cleanup. One computer is gone/donated to a friend, and I have just yet to throw out the other one. I am also excited about bringing in my new mac. It should have been here on Friday but I wasn't here to pick it up. I should have it y tomorrow... and yes it should have been by in that last sentence.... my b button is breaking! D:
Posted by Jeffrey Qua at 11:43 PM No comments:

Email ThisBlogThis!Share to TwitterShare to FacebookShare to Pinterest
Labels: purge 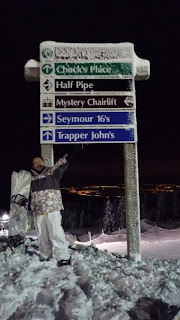 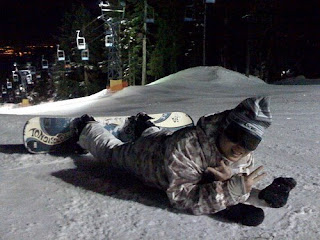 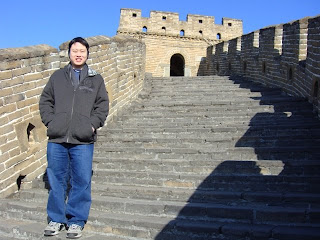 Some snaps from Stanley Park and downtown

I went for a hike yesterday around the sea wall. 10km walk. puff puff. I was feeling okay after the end of it, considering I haven't done any major walking/hiking in a while. My legs were aching a little, but nothing too major, and it's mostly gone now. It was a fun walk. I need to go down there more often.
It was a perfect day. Sunshine and a temperature of 22 degrees. I was a little afraid I was going to get sunburnt or suffer a heatstroke, but I survived exposure in the sunshine =)

Oh yeah! I saw a seal in the water right near the entrance to Stanley Park, near where some kayakers were practicing. I didn't get a good shot of it though. :( 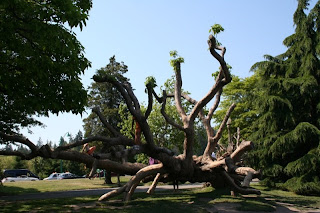 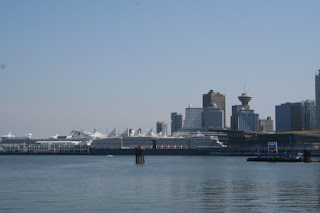 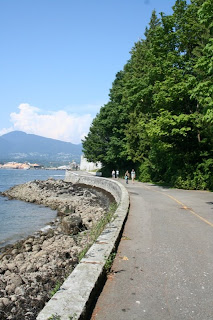 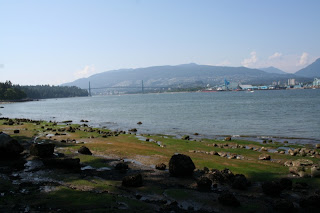 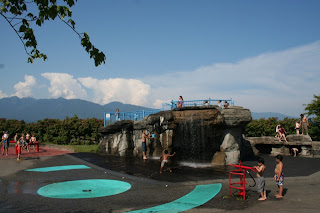 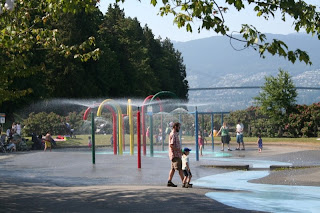 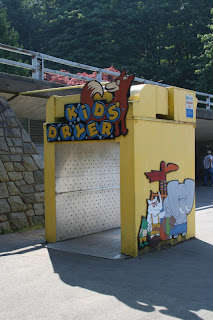 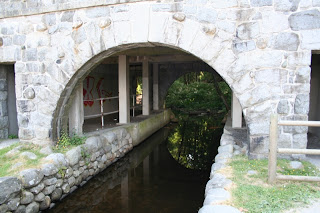 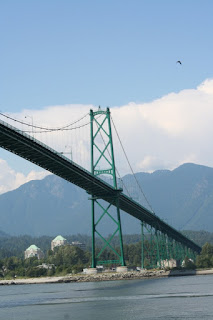 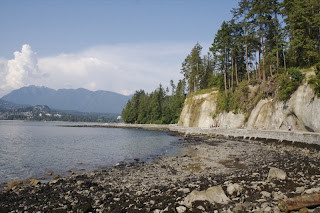 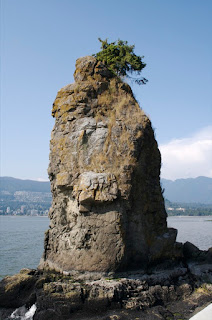 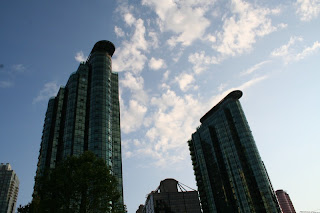 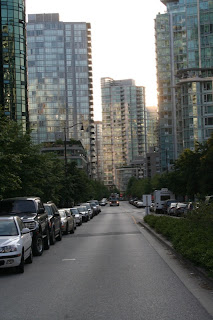 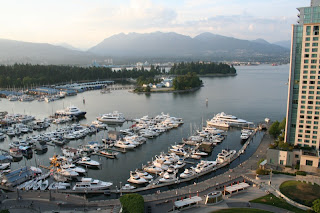 Zakkushi on Denman is a Japanese izakaya that the restaurant dubs as a "Charcoal Grill Diner". They do indeed use a charcoal grill and makes for a very flavorful experience. We were lucky to be able to be seated as we came in early around 6pm. However, since most of the space was already reserved, we got stuck in the worse corner in the restaurant, at the bar right in front of the entrance. The restaurant has a very simple design. Clean, but not much space. The grilling is done in the open right by the bar and you can even sit right in front and watch your order cooked to perfection. Zakkushi is among many of the increasingly popular Japanese izakayas in the Denman food corridor in downtown Vancouver. 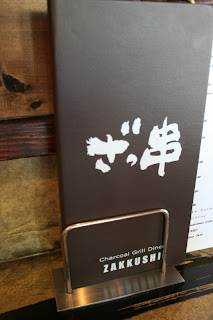 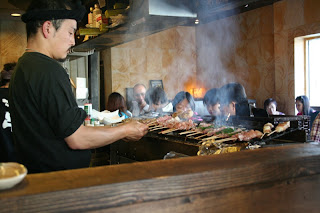 Ebi Mayo(Deep-fried Prawn Skewers w/ Chili Mayonnaise Sauce) - First up, the classic Ebi Mayo. This is standard fare for an izakaya and if they can't prepare this properly, then there is something wrong with the restaurant. Thankfully, the Ebi Mayo here is delicious! 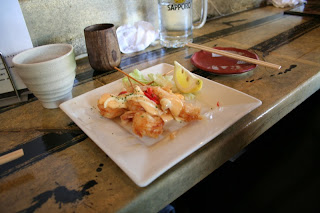 Kushi Set(5 Selected Skewers! Momo, Ninnuku Memaki, Shiso Maki, Gyu-harami, P toro) - Next up was an assortment of Zakkushi's grills. You normally order the grills a la carte, but they provide this as an introduction dish. A breakdown: Momo (Chicken Thigh), Ninnuku Memaki(Garlic Stubs Wrapped w/ Sliced Pork), Shiso Maki(Chicken Thigh Wrapped w/ Shiso Leaf), Gyu-harami (Beef w/ Japanese Radish & Ponzu Sauce), P toro (Pork). They were all pretty tasty except for the Momo. Definitely a must try dish for those who don't know what they want to order. 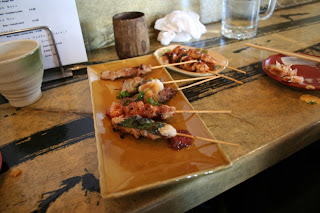 Dotekon(Boiled Daikon radish on Pan-fried Beef teriyaki) - This was off of Zakkushi's "Special Menu". An interesting dish. The broth was a little too rich for me, but the texture of the daikon had a fresh taste mixed in with the beef. 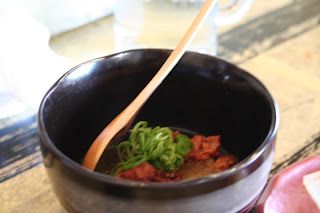 Beef Steak(Beef Sirloin Steak w/ Daikon Radish Garlic Chips) - I am unimpressed by this dish. If I wanted a hunk of steak, I would have gone to a steakhouse. This dish was a little over-charred on the outside and provided no distinct flavor. It's just steak, with some chips. No originality. The quality of the beef was good though. 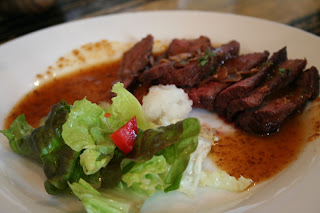 Kawa(Deep fried Chicken Skin) - This was probably an unhealthy dish to order, but it's crunchy chicken skin! Yum. 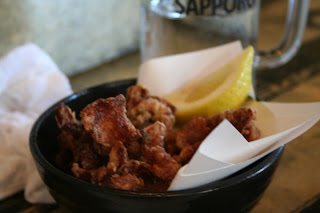 Ebi(Deep fried Sweet Prawn w/ Herb Salt) - I did not like this dish at all. The ebi was not crunchy enough. It was a little mushy inside, and the contrast of the sweet prawn with the salt was too strong. 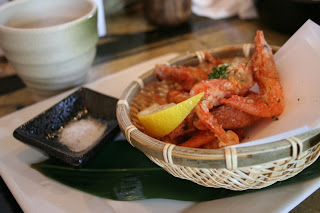 Uzura Maki(Quail Eggs Wrapped w/ Sliced Pork) - I love this dish, but that's also because I love quail eggs. The eggs give a unique contrast to the pork wrapped around it which tasted more (and probably was) like bacon than pork. 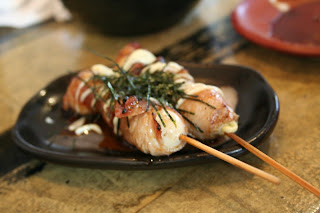 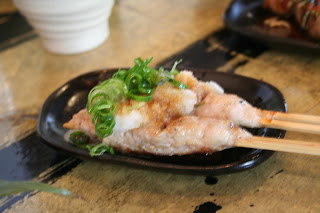 Dorayaki Ice Cream(Sweet Japanese Red Beans in Sponge Cake Served w/ Ice Cream) - This dish is AWESOME! The red bean cake is very light and pairs well with the vanilla ice cream sprinkled with matcha powder. I was actually confused at first. I thought it was Matcha ice cream, but realized it was just the sprinkles. It tasted like a light matcha ice cream. Definitely a MUST try! 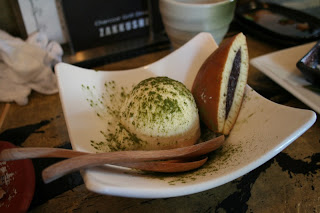 I'm looking forward to trying the other Zakkushi locations, on 4th and the new branch on Main.
Zakkushi on Denman
823 Denman Street, Vancouver, B.C.

Pushed a lot of my old clothes out. It's either going to donation or gifted to people who can still fit in them. I still have a lot of clothing from when I was younger that I've never even seen or worn. I did find a nice blue t-shirt for dad.

Tossing out a bunch of baseball cards. Donruss 91, and Topps 91 cards. Really nice condition, but I don't have the time to go look for collectors. Got rid of some Hockey card stickers that you stick into sticker books.
Posted by Jeffrey Qua at 5:55 PM No comments:

Email ThisBlogThis!Share to TwitterShare to FacebookShare to Pinterest
Labels: cards

I have found some of my old journals. I am reading through some of the entries and though the memories are not bad, the feelings they stir up make me weep inside. These entries are dated Nov 1998.
One entry that brought up emotions of regret was an encounter with an old classmate a few years from the last time I saw them. I really have to think of how different I would be had I not moved, or at least not transferred schools. In some ways, I think that move broke me as a person.

-I was also pretty geeky writing about my current status of video games I was playing. I was playing through Wild Arms(PSX) at the time, and also distressed because my CD-ROM was broken and couldn't play Starcraft (which I think was brand new at the time).

-I was contemplating entering the Incentive program... I took the steps to get in, and once I did, I was mocked by some of them.

-Wow... I was still part of the Maverick Hunters group on AOL at this point.

-A girl I used to know (and who I had a crush on)... our families aren't as close anymore, and I think that was the last time I saw her. (Actually, I think I saw her again at UBC, but I couldn't remember who she was)

-I was really into SchoolReach... I have old scores listed against Cambie

-Ah table tennis. I was so terrible then. That was one of the worst things I could have done. Join a sport that I was terrible at.

Dec 1998
-Watched Enemy Of The State (has it really been that long? that was a good movie)

-Golfing at Mayfair with Kenny, scored a 74 on 9 holes(wow, terrible)

-Starcraft 3on3 versus Kelly's classmates: our team Kelly(Demolition Squad), Haley(Tumulus), and I (EnforcersEliteX) vs his classmate Justin (TheAzzKicker), (Comy), (@Protoss), and (Terminix-Man). We played 3on4 and still won on BGH

-one of the TAs at Palmer told me she wasn't coming back next year b/c she was moving. (weird)

-seems like I was really pissed. I created the WAS Webring, (War Against Sigma, I think, which was a Mega Man website webring). The assistant I assigned took my admin status and took credit for the webring and all of my hard work along with it. There are mentions of revenge, his name, and stabbing. (LOL!)

-I was watching Reboot and Shadow Raiders. (Those shows are sooo ancient now but were good for their time)

-Excited about the release of Starcraft: Brood War

-commented on the invasion of Iraq (Dec 16, 98). Operation Desert Fox was a deployment for Iraq's lack of cooperation with UNSCOM/ UN Weapons Inspectors


----
Okay, I just realized how much there actually is in this journal and am going to stop.
I'm trying to figure whether or not to toss it out.
Posted by Jeffrey Qua at 12:26 AM No comments:

Email ThisBlogThis!Share to TwitterShare to FacebookShare to Pinterest
Labels: journal

I have been slowing down in the past few days. I have gone through my toss pile and now weeding through the items I want to keep and trying to organize how to minimize the space the stuff I... ahem, I don't want to say keep, but rather things I would rather not toss out... Books, some class notes and projects.

A few nights ago, I was in the hospital with some physical issues. I'm hoping first of all, that I'm okay, and after that I hope it goes in line with my re-organization and allows me to re-focus on my overall socio-engineering plan. Let me explain a little bit more of the plan. I will come up with a cooler name and acronym later.
1) Mind+Clarity. First step is obviously the re-organization of my room. The symbolization of the purge will be a strong factor in removing elements from my old identity and most of the excess baggage I have kept for the past few years. Allowing me to shift positions of furniture in my room and just change the overall feel will allow me to clear my visual space and optimize the layout for better feng shui. (Reverse profile: clean out my room and pay attention to the new layout, add personality to room)
2) Physical. I've gone on a little break for the past few weeks but I will re-double my efforts in exercising. I will continue on with badminton and hopefully expand into something new. I am looking towards trying a martial art. I am still researching my options for this. (Reverse profile: move)
3) Social. I went into this a little bit. Still trying to break the shell. Inhibitions are being shoved into oblivion, but hopefully I still keep myself in check and not go overboard. Hear me speak? Then it's an improvement. Hear me tell a joke? You've seen true progress. (Reverse profile: TALK MORE)
4) Expression. I need to speak my mind. I need to express people how I feel. I am a thoughtful person and I will help when I can. I am trying to change how I dress. I am getting rid of a lot of my clothes that I feel that no longer represents what I wish to be. (Reverse profile: Graphology- write bigger, change my wardrobe)
5) Aggression+Speed. I am calm. Too calm. I tend to be still and be a rock to the environment around me. I hesitate. Decisions I make tend to be over thought and take too long.
I need to shift this more towards Sun Tzu's teachings of water. Still and calm when peaceful. But when it moves, to be swift and powerful. Slowly and surely it moves mountains. I have to learn to rely on my instincts, decide, and follow through and not be afraid of making mistakes or regretting decisions. Measure twice, cut once, cut deep, cut fast.(Reverse profile: decide. now.)
Posted by Jeffrey Qua at 1:50 AM No comments: